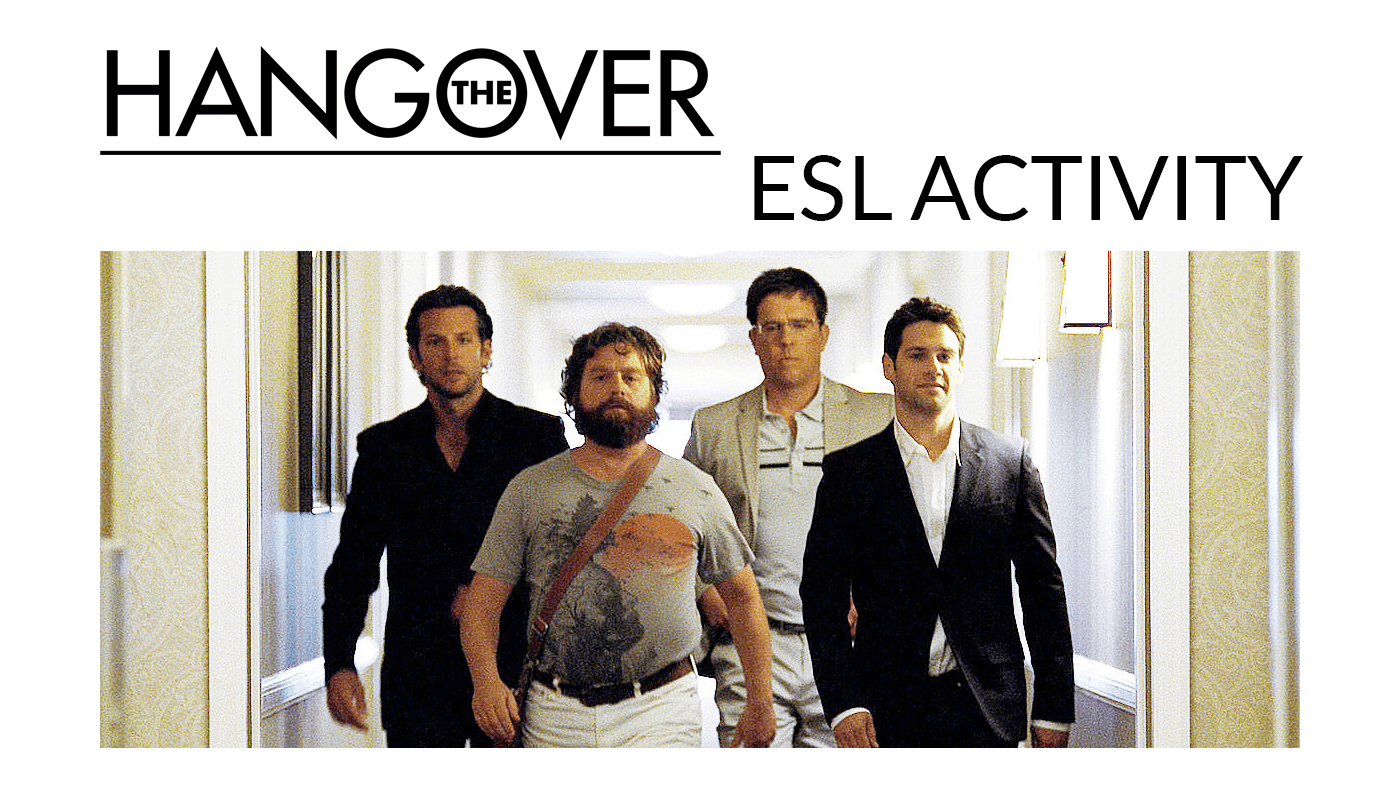 How to use The Hangover for an ESL activity

The Hangover is a trilogy of iconic movies spanning from 2009 to 2013, which personified the ultimate guys’ getaway which many a person could fantasize about. It became a huge hit and is massively popular among 20-40-year-olds.

This in mind, a film that dented itself so profoundly in modern day pop culture surely is a great forum for creating ESL classes, due to its popularity spanning further than merely English speaking countries. Ideas for PPP are varied, however, a great option is to have questions about hangovers for the gist questions, such as “Tell me about the last hangover you had? What was the worst hangover you ever had?”. These are bound to get your students laughing as most of us have a relatively amusing story to tell. Then, you can either show a segment of the film (no more than 2 minutes long), choosing a segment that has some interesting pieces of colloquial language or phrasal verbs for example). After this, teach your target language as normal and wherever possible throw in contextual examples that pertain to the film. The practice activities can be a variety of different ideas, ranging from crosswords whereby the clues are related to the film, or fill in the gaps with quotes from the film. Production can be role-playing different scenes of the film using the target language, or giving the students the opportunity to write a story about a hangover, to name but a few.

In terms of teaching grammar, The Hangover movies offer a lot of different options. The third conditional, things in the past that didn’t happen, could be a great way to talk about what could have happened hypothetically if you didn’t have a wild night out, for example. “If I hadn’t had so many shots, I wouldn’t have woken up with a tiger in my bedroom!” Also, the do’s and don’ts of alcohol consumption – do drink 2 liters of water before going to bed, don’t mix your drinks, do select a designated driver etc. This could be a great way for a younger group of students to learn about alcohol awareness in a more light-hearted way. Taking the class on a more philosophical route, the students could think about the different ways to overcome a hangover, such as going on a run, eating healthily the day after (or a big fried breakfast), or having multiple naps and vegging out in front of a movie with popcorn.

Top tip! For more advanced groups, phrasal verbs can also be explored such as top up (my drink), knock back (a shot) and even throw up (parenthesis not necessary for the latter!)

The Hangover is a great way to introduce new target language and give students an insight into the Anglo-Saxon culture.

Can you think of any other ideas for using the Hangover in the ESL classroom? Do you use any other movies in your classes? Leave a comment on our Facebook page.